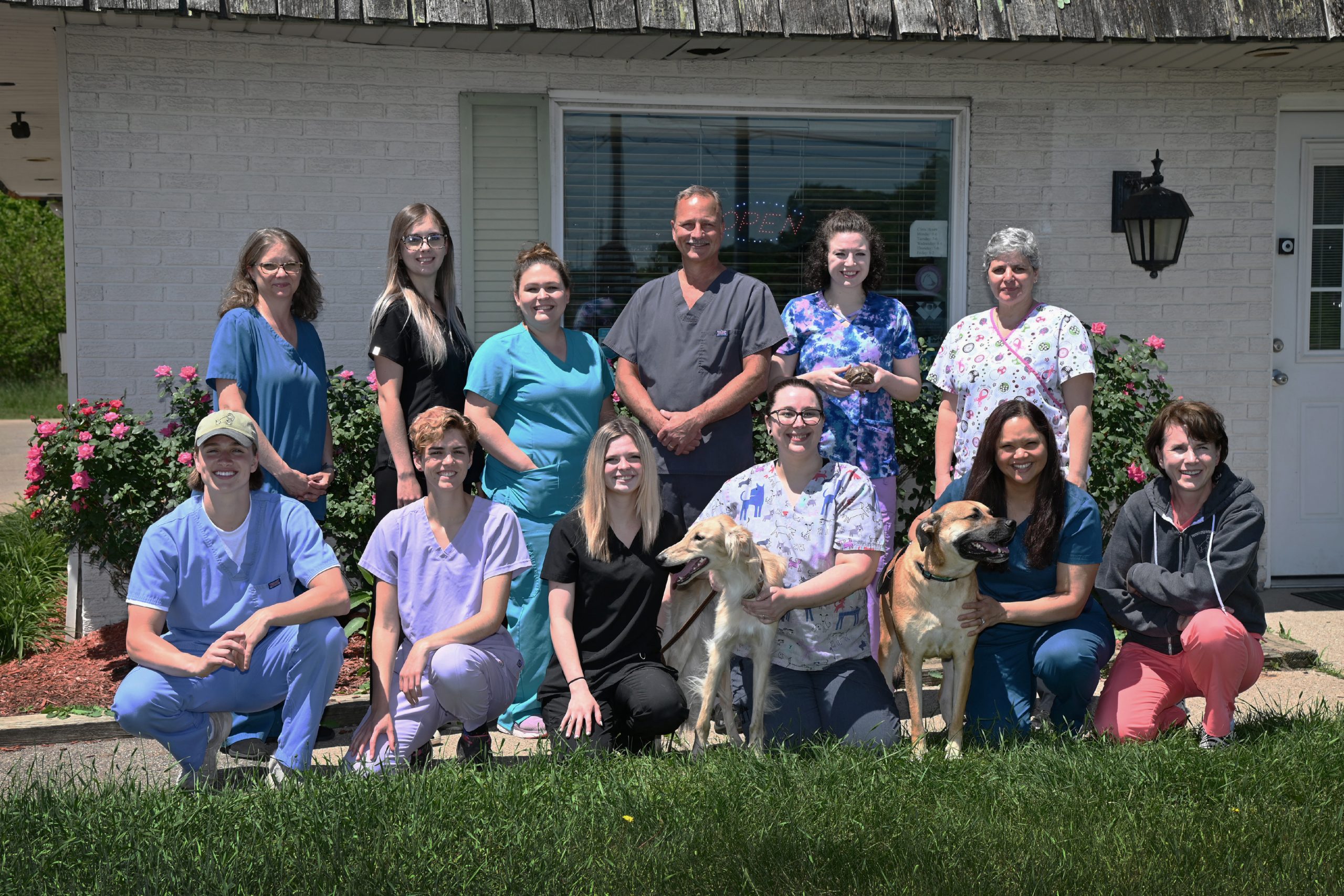 Dr. Joseph Leppanen spent the first 10 years of his life growing up in San Jose, California, and his family would often take trips to the countryside to stay on a friend’s sheep ranch. It wasn’t hard for him to develop a love and appreciation for animals early on in life. As he got a bit older, Dr. Leppanen started to develop intense passions for science and medicine. By the time he had signed up to do volunteer work at a few local animal hospitals, his mind was made up—veterinary medicine was the only choice for him!

Dr. Leppanen started his educational journey at Michigan Technological University as a pre-med student before transferring to Michigan State University to begin his prerequisites for veterinary school. During his time there, he volunteered at three separate animal hospitals while also working as an orderly at the school’s Olin Health Center and the veterinary teaching hospital. Dr. Leppanen graduated with a high-honors degree in medical technology and microbiology, and also obtained an additional bachelor’s degree in zoology.

During his final year of undergraduate studies, Dr. Leppanen was accepted into Michigan State’s School of Veterinary Medicine, where he earned his doctorate in 1985. He then moved to Florida and practiced there for a brief time before returning to Michigan to be with his wife. He took a job at an animal hospital in DeWitt, where he would remain for the next seven years. In 1992, the facility that is now Pennsylvania Veterinary Care was put up for sale—Dr. Leppanen jumped at his chance, and took full ownership that spring. He’s been serving the pets and animal owners of the area ever since!

Dr. Leppanen has returned to his alma mater since graduation in order to expand his own skillset and knowledge; he’s completed courses in orthopedics and has studied in seminars and laboratory workshops in order to better serve his patients. In addition, Dr. Leppanen has done work for the Mid-Michigan Cat Rescue, served as the county veterinarian for Ingham County Animal Control, and given his time to the Capital Area Humane Society.

Outside of work, Dr. Leppanen spends most of his free time with his family—he has four boys and a girl. Together, they enjoy camping, fishing, and boating on Michigan’s beautiful lakes. Dr. Leppanen’s children are also active in sports, and he can often be found attending a local lacrosse, football, basketball, or volleyball game.

Dr. Rizzo is one of our amazing veterinarians here at Penn Vet. A 1999 graduate of Michigan State University, she has a passion for holistic medicine including chiropractic and acupuncture. She shares her life with her husband, 3 children, pet pig Diesel, and an assortment of other animals on her farm outside of Lansing,

Dr. Samantha Kaplan-Cooley was raised in Saline, Michigan and- like most in the veterinary field- loved animals from a very young age, starting with the family’s black Lab, Bruno. Further exposure to animals came from Dr. KC’s father, who used to bring home kittens hidden in his baseball bag. Although her mother didn’t always fully approve of her passion for less conventional pets, she agreed to let Dr. KC babysit the 7th grade science room’s class pets throughout middle school (a bearded dragon, leopard gecko, and millipedes) during summer and winter vacations.

Dr. KC moved to the capital area in 2010 to attend Michigan State University- graduating from the Honor’s College in 2014 with a Bachelor of Science in environmental studies and agriscience with a concentration in science and policy- and she never left. Dr. KC first joined Penn Vet Care in 2015 as a part-time kennel assistant and worked her way up to being a full-time veterinary assistant before starting vet school at MSU’s College of Veterinary Medicine in 2018. She is extremely excited to have officially re-joined the Penn Vet team full-time as an associate veterinarian after officially graduating as a DVM in 2022.

Dr. KC loves using Fear-Free techniques to give pets the most positive veterinary experience possible. She also has a special interest in working with exotic and wildlife species, especially reptiles and amphibians.

In her free time, Dr. KC enjoys taking long walks around Lansing and exploring northern Michigan with her husband, Robert, and senior dog, Delilah. She also likes spending time at home with her cats and various reptiles, including leopard geckos and a three toed box turtle.

Alanna can’t remember a time when she wasn’t passionate about pets. She knew that she wanted a career path that allowed her to promote the health and welfare of animals while proving personally rewarding at the same time. Veterinary medicine was the perfect choice! Alanna is a Licensed Veterinary Technician here at Pennsylvania Veterinary Care.

Alanna is originally from Flint and initially studied pre-veterinary medicine in school before deciding to focus on becoming a Veterinary Technician. She enrolled in Baker College of Flint’s competitive Veterinary Technology program and hasn’t looked back since. After some time working at a pet clinic in Dexter, Alanna joined the Pennsylvania Veterinary Care family in August of 2018 and couldn’t be happier to help Lansing’s pets and animal owners every single day.

Medically, Alanna enjoys surgery and anesthesia work, cytology, pharmacology, and emergency care. Most of all, she loves helping to educate pet owners on the best possible ways to care for their furry friends—talking one-on-one with pet parents is her favorite part of every shift!

Away from work, Alanna enjoys reading, hunting, traveling, and spending quality time with her family. She shares her life with her husband, her young daughter, Dylan, and four dogs named Kiwi, Zoey, Jake, and Pancakes.

Shondi grew up right here in the Lansing area, and felt a natural inclination toward pets from the time she was a little girl. She’s always considered it her responsibility to nurture the animals who offer so much to their loving owners. Working as a veterinary assistant allows Shondi to do just that!

Shondi began her professional career as a medical assistant in the human healthcare field before responding to an advertisement for a veterinary receptionist position in 2002. She began working in Fremont shortly afterward, and quickly realized that she had found her true calling. The veterinary industry allowed Shondi to put her nurturing instincts to good use while benefiting the pets that she loves so much.

Shondi joined the Pennsylvania Veterinary Care family in the fall of 2010 and has happily been serving Lansing’s animal companions and pet owners here ever since. One of her favorite parts of the job is soothing pets who are anxious, and she makes it her mission to provide a positive overall experience for the clinic’s visitors (both the four- and two-legged variety!).

At home, Shondi lives with her husband, their wonderful son, and six pets. The family has four silly cats—Dover, Indy, Mal, and Foo—as well as two Pomeranians named Aura and Spangle. When she isn’t enjoying the company of her own animal friends or tending to pet owners’ needs here at the hospital, Shondi can be found working in her garden, crocheting items to sell at her fall-time craft show, and cooking delicious meals for family and friends.

Kathleen joined our team in August 2020. She originally graduated from cosmetology school, but decided to change her career path after realizing her love of animals. She loves the people she works with and getting to know new pets each day. Kathleen also enjoys being able to observe and learn about the different surgeries that are performed here at our hospital.

Sarah is veterinary assistant and receptionist here at Penn Vet. She has been with us since March 2021. She has over 12 years of experience with working with animals in a variety of fields including boarding, doggie daycares, grooming, eventing barns, and veterinary medicine. She has special interests in canine behavior and body language, responsible pet ownership, and the preservation of purebred dogs. When she’s not helping take care of our patients, she enjoys spending time with her wife and their five dogs and two cats, hiking, horseback riding, and showing her Silken Windhound, Freddie.

Theresa was born and raised right here in Lansing, where she always harbored a deep affection for animals. She never suspected that she would one day work in the veterinary field, but when her previous career started to leave her feeling unfulfilled, she knew it was time for a change. Theresa decided that a job in animal care was the perfect fit! She’s been a part of the Pennsylvania Veterinary Care family for over a decade.

Theresa first joined the Pennsylvania Veterinary Care team in May of 2005 and has worked in various areas of the clinic during her tenure here. Currently, she serves as a front-desk receptionist, where she loves greeting pet owners and their beloved animal companions as soon as they walk into the hospital. Theresa’s favorite part of her job is the element of surprise—she just never knows what each new day might bring!

Theresa and her husband of over 30 years, Tony, have three grown children and three wonderful grandchildren. They share their home with two Chihuahuas—Kevin and Dalton—as well as four cats.

When she isn’t caring for pets here at the clinic, spending time with her own animal companions at home, or doting on her grandchildren, Theresa is a seamstress and a small-business owner. She runs her own online Etsy shop and sells her work to customers all over the country!

After seeing her own dog go through a few health troubles, Jocelyn knew that she wanted to help as many pets as she possibly could live happier, healthier lives with their loving human counterparts. When the opportunity arose for her to join the team at a veterinary clinic, she knew she couldn’t pass up her chance! Jocelyn has been a member of the Pennsylvania Veterinary Care family ever since.

Jocelyn decided to pursue her passion in the veterinary world in the fall of 2017 after she completed homeschooling her daughter. That’s when she found an opening here at the clinic—Jocelyn was thrilled to join the team as a member of the talented and compassionate front-desk staff.

Around the clinic, Jocelyn’s favorite parts of her job are learning more and more about pet care and helping as many animal owners as she possibly can. In the future, she looks forward to branching out into other areas of pet welfare—she would like to help shelter pets, train dogs to become service animals, or develop therapy pets for the elderly and disabled!

Font Resize
Contrast
Accessibility by WAH
Call Us Text Us